How to make people care about 'the serious stuff' 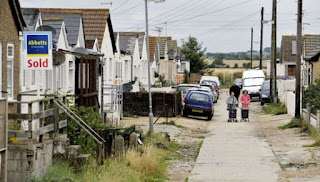 East Jaywick: the most deprived neigbourhood in England. Do people elsewhere care?

Sadly, I live in a world in which we can measure exactly how interested people are in such things.

In order to identify a solution, we need to be clear about the nature of the problem.

First, the good news: in my experience, it's not that people can't be made to take an interest. It's just that it doesn't always come naturally, at least to most. Not in the way it comes naturally to click on a story about a celebrity doing an ill-advised thing while drunk, or a video of a street brawl, or expert analysis of a football game you just watched.

Second, the not-entirely-surprising news: in general people care more about their own lives than the lives of others, and more about the concrete than the abstract.

To illustrate the point, consider a story that says one in seven women continue to smoke in pregnancy, right up to the moment they give birth.

But what if the story includes a specific person - a heavily-pregnant woman who gives an interview, and poses for pictures, arguing that she doesn't believe cigarettes are doing her unborn any harm, and in any case she doesn't intend to stop?

That story - the concrete, not the abstract - will get a lot more clicks. It will generate a lot more engagement, and a lot more debate.

And if a reader happens to know the woman in question - the personal, not the general - well, I can't imagine a single person who wouldn't click.

Perhaps that's just human nature. Whatever: there are lessons we can learn, and things data journalism can do to help.

Consider now the recently-published statistics on deprivation in neighbourhoods in England. These were undoubtedly important: they showed that pockets of just a few hundred families in the poorest parts of the country seemed to be trapped at the bottom of the pile, perpetually faring worst, in all respects, than upwardly-mobile places often just a stone's throw away.

Still, unless you lived in one of those neighbourhoods, how much would you actually care?

In order to address this - in order to give our coverage a concrete, personal aspect - we created a little gadget which enabled people to enter their postcode and find out exactly how deprived their neighbourhood was (or wasn't). 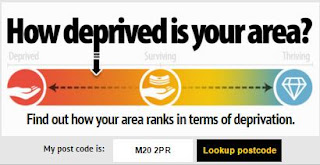 Hey, presto: a story which had fared quite badly in the past (without a gadget) suddenly became one of the most-read news stories on both the Mirror and the Manchester Evening News. People were sharing their results, talking about their results - and consequently talking about deprivation. 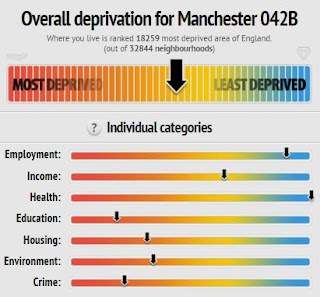 Are these people 'interested' in deprivation in precisely the way that the most noble-minded among us would like? Perhaps not. But they are interested in it.

Maybe they approach it through the prism of their own lives; but if our gadget shows them how lucky they are, and gets them thinking about other people who are far less lucky, I'd say that's more of a win than simply hoping that one day the world will be other than how it is.
Posted by David Ottewell at 13:42 No comments: 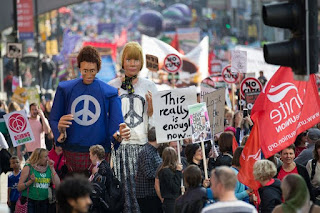 Yes, those on the right of the party are still pissed off that he won and will leap on him with glee every time he fails to sing the national anthem, or talks about nuclear weapons, or wears trousers that don't match his jacket. So be it.

Jeremy Corbyn's USP is that he isn't part of the political mainstream, the middle-ground consensus.

Can he win an election from the left? Almost certainly not. I thought he was a terrible choice for the party and still do. But trying to force him into adopting a few tokenistic centrist policies, or spending a fortune on spin doctors to teach him how to walk and talk and dress, will just make him look inauthentic and weak. It would imply the very thing that made him attractive – his difference, his idealism – is something he would compromise for a sniff of power.

His only chance is if Britain really has changed as much as the Labour party. I doubt that very much; but Jeremy Corbyn being Jeremy Corbyn might at least change the way a few people think about politics and politicians, stir some passions, frame some important debates. That matters.

2. Like it or not, David Cameron is a centrist at heart

It is frankly undeniable that David Cameron has overseen significant changes in the Conservative party.

Today he got a standing ovation with a passionate plea for religious tolerance and gender pay-equality. That simply wouldn't have happened in the pre-Cameron era.

It's easy to forget he won the leadership election with a positive, eco-friendly, modernising message. It's easy to believe that lurking behind that message, always, was a true-blue Thatcherite heart.

And yet, however strategically sensible it might have been for him to pitch for the centre ground today, he didn't have to. He has a majority. He is planning to stand down. He can do what he wants for the next four years.

What he wants to do, I suspect, is define his legacy. And he wants that legacy to be as a leader of Britain, not a leader of the Conservatives.

3. Ed Miliband was a disaster for Labour

Put simply, the party has learned the wrong lessons from his defeat.

In fact, he was: authentically Ed Miliband. A well-meaning, nice-enough, slightly geeky, Islington socialist. A man who had never lived, and didn't understand, the lives of the very 'hard-working families' he talked about so much.

He never really spoke about schools and education. He didn't recognise how much people might want to own their own homes. Instead he focused on the extremes: the very poor and the very rich.

While plenty of people trying to raise a family on the median wage (or just below) might think the 'bedroom tax' led to some unfair outcomes, or that the very rich should contribute more in tax, these really aren't their main concerns.

That doesn't make them awful people. Ed Miliband had no intuitive understanding of those concerns. So they didn't vote for him.

4. Politics is getting more divisive

Win or lose, Jeremy Corbyn has already achieved one thing: he has stirred and emboldened those people on the left who might have thought 'mainstream' politics deserted them during the Blair years.

The tens of thousands who marched through Manchester this weekend did so in the belief, the knowledge, that through the new Labour leadership they are now part of the debate. Or rather, that their voice will now be heard. Whether they are interested in listening is another matter.

Either way, the ranks of the 'noisy disenchanted' will swell; anger will drive more of the discourse; and it is hard to predict quite how that will end. It's very easy for older hacks to claim that this is simply the 1980s all over again. But a glance over the border to Scotland should show just how quickly politics can change in remarkable ways.

5. The Liberal Democrats are in serious trouble

The Liberal Democrat conference seemed to pass by almost unremarked. You'd think Labour vacating the central ground would present them with a real opportunity. But no one appears to be talking about the Lib Dems.

That's bad. At least former Lib Dem voters felt something about Nick Clegg, even if it was anger. Now it seems like a lot of people don't feel anything about the Lib Dems at all.

Tim Farron is going to have to work extremely hard simply to get a hearing. Cameron pitching for the centre ground will make things even worse.

It's actually quite sad, in a way, to see a party which worked so hard to get a footing – particularly in local government – have to essentially start again from scratch.
Posted by David Ottewell at 15:35 No comments: