When did Labour stop caring about winning? 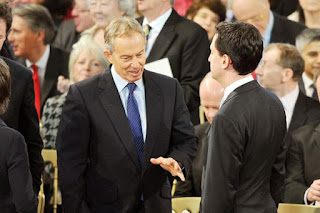 "A meme entered the Labour mind that identified its time in office with the Iraq war and overindulgence of the rich. The progressive achievements of 13 years in power – the minimum wage, equality legislation, record spending on public services, the greatest amount of redistribution from rich to poor of any period of Labour government – all that was gradually effaced."


So wrote Andrew Rawnsley in his column this weekend.

I don't know exactly when it was that I started to find the collective voice of the modern Labour party ever-so-slightly annoying. When it began to sound a bit less like a kind, open, optimistic friend, and a bit more like a hectoring A-level sociology student at the dinner table.

When it seemed to have became more important to win arguments than elections; to have the smug satisfaction of being 'right' rather than helping millions of people live slightly better, fairer, healthier lives.

Who is this collective voice? Honestly I don't know; but I don't recognise the voice of the Labour councillors, party members and MPs that I dealt with during my years at a political editor. I hear a younger, angrier, less nuanced voice. I hear a voice less rooted in the struggles of everyday politics. I hear a voice that may take defeat very personally, but is metropolitan, reasonably well off, and doesn't have to personally live with the consequences of that defeat.

It is a voice that sees the world in black and white; where it isn't enough for the Tories to be wrong. They have to be evil, too.

And so, it seems, does Tony Blair.

Because nothing is so utterly perplexing to me than the attitude of this current Labour voice to the last man to actually win them an election.

Now I understand what happened in Iraq. Honestly, I do. And I understand why many people will find what the government did over that issue utterly unforgivable.

But surely, apart from that, we should still be able to ask the question: what else happened during the Blair years? And was it good or bad for the country, from a Labour-supporter's point of view?

Because when I think of the Blair years I also think of the very large sums of money that were ploughed into our public services. I think of the thousands of schools that were completely rebuilt; the fact investment in the NHS rose to something like what it should have been for a Western European country.

I think of the many lives that were undoubtedly saved as a result. Lives of family members, friends.

I think of the Human Rights Act, the abolition of hereditary peers, the Freedom of Information Act. I think of devolution.

I think of the completion of a sustainable peace in Northern Ireland.

I remember discussions with Conservative friends and contacts who were genuinely worried that their party had been pushed to the margins and rendered obsolete.

None of the things are minor details.

None of them can be brushed out of moral existence with an impatient snort, a wave of the hand, and an angry: "Yes but Iraq!"

They did happen. They did change the political discourse.

They did make a huge difference to people's lives.

And I think that should matter.

I'm not arguing for a second that the Blair years, domestically, were above reproach. That would be ridiculous. You can question the levels of spending once the 'golden rule' was ditched. You can question the efficacy of much of the spending: PFI, for example, or the love of expensive bureaucracy, watchdogs and scrutineers.

And you certainly question the fact that our economy was driven to a dangerously large extent by flyaway house prices stoked by dodgy lending, and an under-regulated financial sector that no one wanted to ask too many searching questions about.

The fact remains: from a Labour perspective there was an enormous amount of money spent, with the majority targeted at the poor. There was a real push to improve education and work towards a meritocracy.

I think that should matter.

People who are working hard and trying to support a family on the median wage, for example.

You can't just tell those people that if they don't care about the 'bedroom tax' or food banks then they are plain selfish.

They have concerns of their own, legitimate concerns that you need to understand and address.

You need to win their trust, and build a coalition which gives you the right to change the world.

You need to listen, not lecture.

You need to admit you might be wrong, or at the very least consider this: isn't it possible that rightness is measured, ultimately, not by the number of like-minded keyboard warriors who share and endorse your views on social media, but rather by the number of lives that you actually get to improve?
Posted by David Ottewell at 12:22