The league of love and hate: a virtuous data circle

I love the idea of generating useful and interesting content purely from data supplied by readers.

It's what makes TripAdvisor so successful. It isn't like anyone's getting cheated; people like giving their opinions, just as they like reading the opinions of others.

And the more people give their opinion, the more valuable the dataset becomes.

I remember when we first set up systems to collect fans' player ratings for football matches. A couple of people would object along the lines of: "Is this really worth it if sometimes on a couple of hundred people are actually filling in the ratings forms?"

The answer is yes. Because how many people submit ratings is far less significant than how many people engage with those ratings. Far more people want to read ratings than want to supply them.

Plus, once you've started collecting the data, there are all manner of other types of content you can create, questions you can answer.

One of my favourite user-generated data projects is the League of Love and Hate. It's a glorified survey we run every year in the off-season. Essentially we ask people to tell us which Premier League team they support (if any), then tell us what they think of other teams in the league. 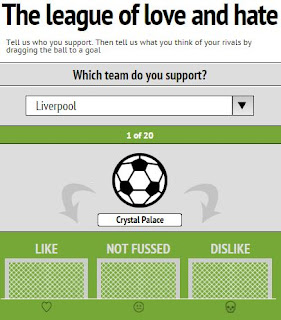 The overall result - most liked and disliked - is done on a 'Eurovision-style' voting system. The views of fans of all clubs carry the same weight, no matter how many of them actually choose to vote.

This year, as things stand, it isn't looking great for Manchester United: 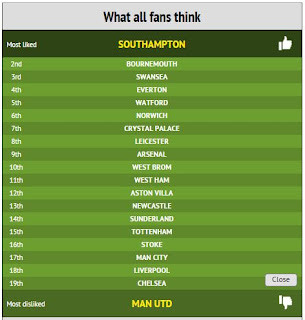 We can also tell fans who complete the survey what fans of other clubs think about their team.

In the case of Liverpool, for example, Everton fans dislike their neighbours the most. Leicester fans, for whatever reason, seem to have a soft spot for Liverpool: 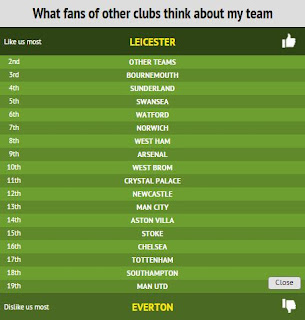 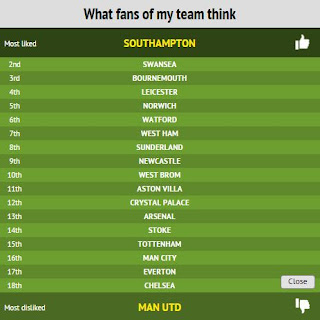 The League of Love and Hate was only ever intended as a bit of off-season fun. What's interesting, though, is the amount of coverage this rather light-hearted poll has gathered in the past. Even our media rivals pounced on the results in 2013, which showed Chelsea (rather than Manchester United) at the bottom of the popularity pile. In terms of Trinity Mirror titles, headlines like this were some of the best read that month.

All of which goes to show: harnessed correctly, and with the right caveats, there's something enduringly fascinating about the wisdom of the crowd.
Posted by David Ottewell at 14:54